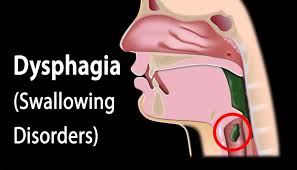 Dysphagia or difficulty swallowing means it takes time and effort to move food or liquid from the patient’s mouth to their stomach. Dysphagia may also be associated with pain. In some cases, swallowing may be impossible.

Although the medical term “dysphagia” is often regarded as a symptom or sign, it is sometimes used to describe a condition in its own right. There is a wide range of potential causes of dysphagia; occasional difficulty swallowing, which may occur when a person eats too fast or doesn’t chew their food well enough, usually isn’t cause for concern.

There are three general types of Dysphagia;

Oral Dysphagia (High Dysphagia) – the problem is in the mouth, sometimes caused by tongue weakness after a stroke, difficulty chewing food, or problems transporting food from the mouth.

Pharyngeal Dysphagia – the problem is in the throat. Issues in the throat are often caused by a neurological problem that affects the nerves (such as Parkinson’s disease, stroke, or amyotrophic lateral sclerosis).

Esophageal Dysphagia (Low Dysphagia) – the problem is in the esophagus.  This is usually because of a blockage or irritation. Often, a surgical procedure is required.

Signs and symptoms associated with Dysphagia may include;

Possible causes of Dysphagia include;

Treatments usually depend on the cause and type of dysphagia. The type of dysphagia a patient has can usually be diagnosed after testing their swallowing ability and examining the esophagus.

Many cases of dysphagia can be improved with treatment. Treatment for dysphagia include;