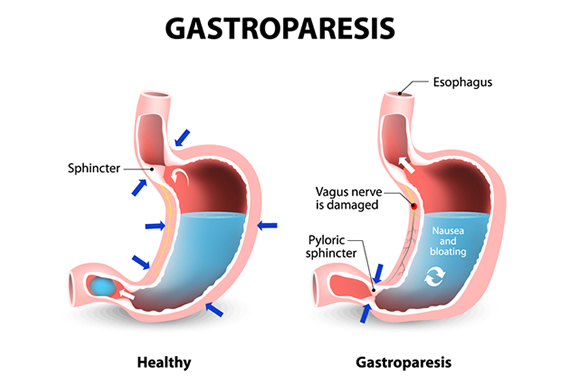 Gastroparesis is a disease in which the stomach cannot empty itself of food in a normal way. It is a condition that affects normal spontaneous movement of the muscles (motility) on the stomach.

Usually, strong muscular contractions propel food through the digestive tract. But if a person has gastroparesis, their stomach’s motility is slowed down or doesn’t work at all, preventing the stomach from emptying properly.

Gastroparesis can interfere with normal digestion, cause nausea and vomiting, and cause problems with blood sugar levels and nutrition. The cause of gastroparesis is usually unknown. Sometimes it’s a complication of diabetes, and some people develop gastroparesis after surgery.

If a person has gastroparesis signs and symptoms include;

Gastroparesis is caused by nerve injury, including damage to the vagus nerve. In its normal state, the vagus nerve contracts (tightens) the stomach muscles to help move food through the digestive tract.

In cases of gastroparesis, the vagus nerve is damaged by diabetes. This prevents the muscle of the stomach and intestine from working properly, which keeps food from moving from the stomach to the intestine.

Doctors use several tests to help diagnose gastroparesis and rule out conditions that may cause similar symptoms. Tests may include;

Depending on the cause, gastroparesis can be chronic, which means it lasts a long time. The patient can take steps to manage and control it.