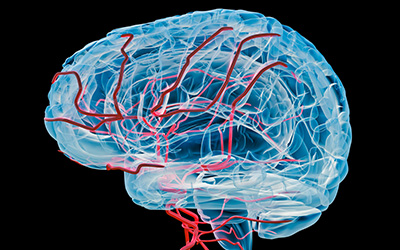 Vascular dementia is a type of dementia that accounts for around 20% of diagnoses, roughly 150,000 people. It is caused by reduced blood flow to the brain and is most common in those aged over 65.

Vascular dementia can be developed after a stroke blocks an artery in the brain, but strokes don’t always cause vascular dementia. Whether a stroke affects the thinking and reasoning depends on the stroke’s severity and location.

Vascular dementia can also result from other conditions that damage blood vessels and reduce circulation, depriving the brain of vital oxygen and nutrients.

Symptoms that suddenly get worse after stroke. Doctors look for symptoms that progress in noticeable stages to diagnose vascular dementia.

Alzheimer’s, by comparison, progresses at a slow, steady pace. Another clue is impaired coordination or balance.

In vascular dementia, problems walking or balancing can happen early. With Alzheimer’s, these symptoms usually occur late in the disease.

Doctors can nearly always determine that a person has dementia, but there’s no specific test that confirms a person has vascular dementia.

The doctor will make a judgement about whether vascular dementia is the most likely cause of the symptoms based on the information the patient provides, medical history for stroke or disorders of the heart and blood vessels, and results of tests that may help clarify a person’s diagnosis.

Treatment primarily works to prevent the worsening of vascular dementia by treating the underlying disease, such as hypertension, hyperlipidemia or diabetes mellitus.

Depending on the individual situation, the doctor may prescribe medications to;